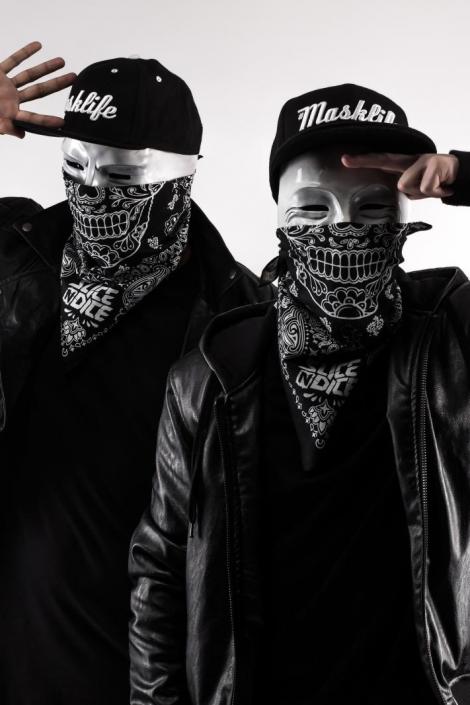 With a support list including the likes of DVBBS, Yves V, Deorro, The Chainsmokers, Alvaro , Chuckie, Danny Avilla, Tommie Sunshine, Henry Fong, Will Sparks, Timmy Trumpet and countless others it’s no surprise these masked party starters from Melbourne are one of the fastest rising talents to come out of Australia. With an arsenal of productions behind them the duo have had their works featured on EDM’s premier main stages, from Tomorrowland and Ultra Music Festival to EDC and an official Q-Dance stage anthem! oh, all while firmly keeping their identities a closely guarded secret..
Their high energy, high impact shows see the pair blending anything from Electro, Trap & Dubstep to their signature brand of Melbourne Bounce coupled along with their loyal fans, known lovingly as the “Masklife Nation”, have seen them propelled to #9 in the InTheMix top50 national Dj poll, being hand-picked by Sol Republic as Brand Representatives AND earning their place as National Main Stage residents of Australia’s GoodLife Music Tour between the likes of Deadmau5, Hardwell, Avicii, Afrojack, Knife Party, R3Hab, Porter Robinson and more of EDM’s Royalty.
Known for their diversity; their duo’s production prowess have repeatedly climbed to the top tiers of Beatport’s charts, Releasing on labels like Dim Mak, Ministry of Sound, and Onelove and taking out numerous spots in the electro house genre, an 8 month streak as #1 in the minimal Genre whilst scoring a impressive run in the hiphop charts with a top 50 placement.No stranger to the global stage either, these masked crusaders have already taken their electric stage presence and theatrics across the globe! With several US & Mexican shows runs already under their belt and a slew of appearances across Asia including Mongolia, Indonesia, Hong Kong & South Korea, there seems to be no end in sight for these two with their only goal being total world domination!